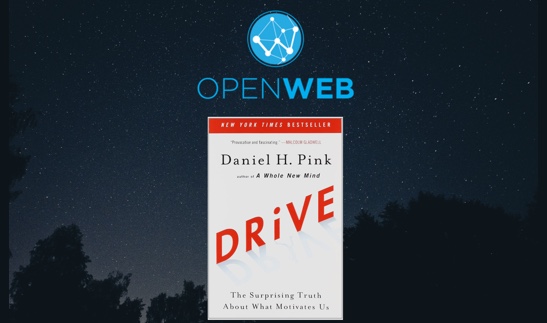 [Book] Drive: The Surprising Truth About What Motivates Us by Daniel Pink

Over the past year and a half, I’ve been constantly trying to find the single driver that will keep me motivated to work towards my goals each day. But there’s a quote that sums up why I still haven’t found it.

“Motivation is the bug that bites you in the ass when you need it. What you need is discipline.” I recently finished Drive: The Surprising Truth About What Motivates Us by Daniel Pink. In this book, Pink runs through a series of psychological experiments and decade-long observations that analyze how humans can perform at their highest level.

As modern day humans, we have the innate drive to eat, drink, reproduce, and respond predictably to either positive or negative stimuli. However, over a long period of time, how do we keep ourselves motivated, day in and day out?

I’ve had the opportunity to observe this phenomenon firsthand in one of the student clubs I am in, Open Web. I co-founded Open Web the spring of 2014 with my roommate and several of my friends, aiming to teach web development to Boston University students with the hope they would join one of the many student teams we organized to create websites free-of-charge for nonprofit companies in the Boston area.

At our inception, we had almost 300 students sign up for our mailing list. At our first general meeting, we had more than 60 students show up eager to join one of our four student teams. Now, for each one of our four teams, we are lucky to have five people show up to each weekly meeting

And I constantly ask myself this question.

“What keeps these people motivated and what can I do to help them perform at their highest level?” I’ve identified three major issues in Open Web’s current organizational structure that might explain why we struggle to attract and retain driven members.

As Open Web expands into its second year, we realize that we can attempt to motivate our members as much as we want through discipline or incentives, but the only way to attract and retain truly motivated members is to provide the right work environment for each member to work in. I firmly believe that there are motivated people at BU, but more importantly, I believe that by restructuring the way we operate, we can create a symbiotic relationship that creates more value for both our members and for Open Web.

Here are some other books I’ve read: